Bumbling Brothers Circus is the first story arc from the fifth/finale season of Rocky and Bullwinkle (originally titled The Bullwinkle Show). It was broadcast on NBC during the 1963-64 television season.

The Bumbling Bros. Circus comes to Frostbite Falls, and Rocky J. Squirrel and Bullwinkle J. Moose are introduced to the brothers Hugo and Igo Bumbling. Our heroes are almost attacked by a lion, until Bullwinkle plays a song on his comb that quells the beast. The lion tamer (aka Boris Badenov in disguise) is promptly fired. Boris also attempts to burn down the circus tent, but is foiled in his attempt. Rocky and Bullwinkle join up with the circus, but soon the circus is set upon by a rainstorm that follows them wherever they go. Rocky investigates, and finds a group of Indians being led by Boris (unknown to Rocky, of course). Eventually, the Indians make peace with the Bumbling Bros, and normalcy returns, until the brothers find that their elephants are losing weight at a rapid pace. It is soon found out that Boris has disguised himself as a little boy, and is feeding the elephants weight-loss pills. This is eventually stopped, but not before Boris and Natasha Fatale disguise themselves as a lion, intending to kill Bullwinkle with poison-tipped teeth in the lion. The two end up donating the disguised lion to a zoo, and then returning home with the Bumbling Bros continuing their famous circus elsewhere. 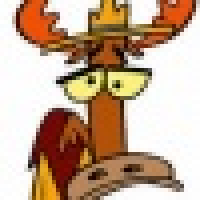