Dudley Do-Right is the main protagonist of The Rocky & Bullwinkle Show short Dudley Do-Right. In 1999 he appeared as the main character in a comedy movie of the same name. As a mounted constable Dudley is extremely ineffective owing to his unparalleled stupidity and trusting nature.

Dudley Do-Right is posted at the Royal Canadian Mounted Police Camp in Alberta, Canada. As a young man, Do-Right fell into a sewer and, mistaking it for the theatre, waited three days for the movie to start. Upon discovering his mistake he promptly turned himself in to the police for trespassing on city property. Instead of receiving the usual sentence of 30 years, Dudley Do-Right was enlisted into the Royal Canadian Mounted Police force.

He frequently captures RCMP nemesis Snidely Whiplash, only to allow him to escape shortly thereafter. Dudley is under the command of Inspector Fenwick, the father of his love interest, Nell Fenwick. Do-Right's Horse is often portrayed as more intelligent then his bumbling master, and is the true love of Nell Fenwick.

Dudley Do-Right is tall and lanky in stature with blond hair, a hooked nose, and a conspicuous double-chin. He is nearly always seen in the blue trousers and scarlet-and-gold uniform of the Royal Canadian Mounted Police.

A near perfect stereotype of the lovable, bumbling policeman, Do-Right is naive and extremely trusting. The laughable constable is severely lacking in intelligence and is undoubtedly the worst trooper in the force, despite his unquestionable loyalty and strict observance of "the Canadian way."

Although Dudley is by far the worst RCMP trooper, he is the only one who can bring in villain Snidely Whiplash. He frequently completes assignments by accident, and often avoids danger through his irrational, confused thought process. When seized by a strong emotion, Do-Right is capable of showing considerable grit and determination. 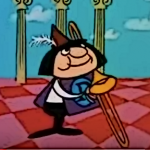