Fearless Leader is the dictator of the fictional country Pottsylvania, and the employer of the inept government agents Boris Badenov and Natasha Fatale. He could always be found in his underground hideout, "Central Control." However, he did answer to one man himself: the diminutive Mr. Big. Mr. Big appears in two storylines of the series, "Upsidaisium" and "Metal Munching Moon Mice." Mr. Big is confirmed to be Fearless Leader's superior; however, Mr. Big works behind the scenes in the shadows, while Fearless Leader seems to act as Pottsylvania's public figure and military leader.

Fearless Leader is very thin and has a long, pointed nose, sharp cheekbones, and a long pointed chin that juts out. His most notable feature is a long scar on his cheek, where the marks of stitches can be seen. He is taller than Boris, and is only slightly shorter than Natasha.

He wears a monocle and a German-styled Military uniform, including black boots, a large hat with a skull and crossbones, and poofy pants. He is usually seen smoking from a cigarette holder.

In one storyline, he wore a yellow football coach's uniform as the coach for the team Boris put together to ruin thousands of illegal gamblers, the Mud City Manglers, a rowdy, dangerous group of thieves, killers, unspeakable turks and plug uglys who would don wigs and mini blouses and poorly masquerade as girls.

As expected from his given position and name, Fearless Leader is a strict, ruthless character, and often harshly rebukes the incompetence of his main minion Boris, and any others. He is distrustful of his own government employees and is known to carry the Pottsylvania treasury with him wherever he goes. He himself is untrustworthy, as he once convinced an employee to tell him bad news by convincing him to trust him and after the information was given proceeded to do exactly what the employee feared he would (liquidate him), while shouting to let it be a lesson to not trust others. He is shown to have a harsh temper, and will often resort to violence when insulted, and has no qualms about killing or attempting to kill his subordinates as punishment, even when coaching a football team.

He is extremely patriotic to the point of showing traits of Jinogism, at one point singing the national anthem of Pottsylvania when revealing his plan for world domination in the Missouri Mish Mash story arc, and in the Goof Gas story arc his motive is revealed to be that since Pottsylvania has no culture, arts, or resources to export, they will simply export their "mean" by declaring war on the world without telling anyone (because the Pottsylanian military is full of cowards, and thus would not fair well in a normal war). In a newspaper comic, he even assigned Boris onto a mission to improve Pottsylvania's recognition across the world. He also frequently refers to his plots as helping Pottsylvania rule the world rather than referring to himself ruling the world.

As his name implies, he is not easily scared, and rarely shows any signs of fear. The only thing he seems to fear is Pottsylvanian television programming, which was bad enough that Boris and he tried to weaponize it in the Rocket Fuel arc to blackmail the United States.

Although Pottsylvania's chief spies are given ersatz Russian accents, Fearless Leader's accent seems more in keeping with the German stereotype. He uses some German such as "Achtung"(can translate to danger, esteem, respect, attention, regard, or deference)  and "Schweinhund," (an uncommon insult that translates to pighound) typical of German stereotypes in film and TV. He speaks loudly in a demanding tone, rarely ever speaking softly.

He apparently has a weakness for autographed celebrity photos, as he let Boris Badenov live in exchange for an autographed photograph of Sonny Tufts, while refusing everything else Boris offered. When Boris presented this in exchange for his life, Fearless Leader was briefly shocked, and told Boris "You've found the chink in my armor."

If he is particularly pleased with someone, he will act more friendly towards them, and give them permission to call him "F.L." instead of his full title, which is apparently considered a fairly high honor. He also may provide rewards for foul deeds that benefit his plans, even awarding medals on the spot.

In the 2018 reboot, Fearless Leader is portrayed in a much more comedic manner. He is frustrated that Pottsylvania is viewed as a laughingstock by other countries, and wishes to take over the world in retaliation.

Natasha Fatale: Fearless Leader seems fairly indifferent to Natasha, and directs most of his anger towards Boris. However, as Boris's partner, she often ends up being rebuked, as well, and he would not think twice about giving Natasha the same harsh punishments as Boris.

Rocky and Bullwinkle: As the two often get mixed up in Fearless Leader's plans, their role changes based on the situation. In some situations, Fearless Leader may see them as pawns to try and manipulate. In others, they may need to be killed as they are interfering. In many situations, he keeps switching between needing them dead or alive, as the situation changes due to various blunders.

Mr. Big: Mr. Big is the only person Fearless Leader answers to, and he often has to report back to Mr. Big on various matters. Other than this, little is known of their relationship.

Other Politicians: When meeting with other Pottsylanian politicians, Fearless Leader threatens them at gunpoint, and shows little regard to their lives, even testing a faulty death Ray on them, before scolding the inventor because it didn't work.

Fearless Leader is an effective strategist, a convincing liar, and is presumed to have a strong military background. He is knowledgeable with firearms, and seems to consider physics something "any Pottsylvanian schoolchild could tell you."

In the 2014 short, he is evidenced to be a skilled hunter, as he has a variety of different animals mounted on his wall (missing only a Moose and a Squirrel). 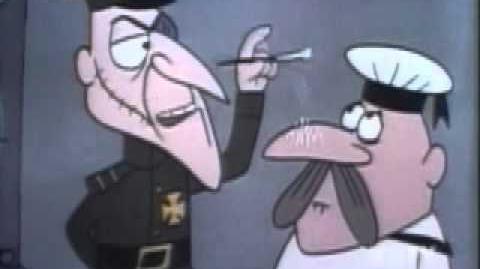 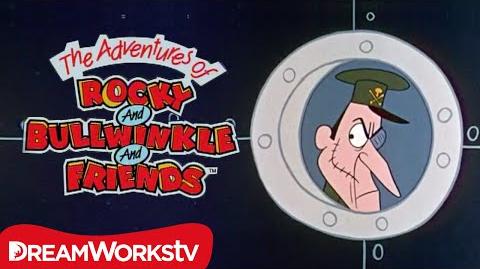 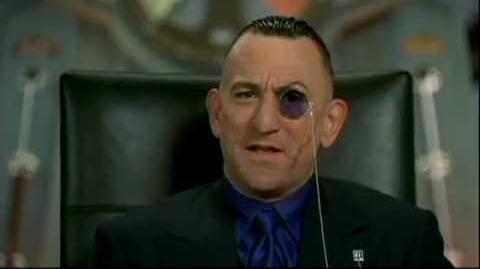 Are you talking to me?

Community content is available under CC-BY-SA unless otherwise noted.
Advertisement