Mister Big was a villain on the 1960s cartoon series Rocky and His Friends and The Bullwinkle Show, both shows often collectively referred to as Rocky and Bullwinkle. He is voiced by Bill Scott doing an imitation of Peter Lorre.

Mr. Big's role in the series was serving the government of the fictional nation of Pottsylvania in some manner. Fearless Leader, the head of state of Pottsylvania, has been shown consulting with Mr. Big on what orders he should send to spies Boris Badenov and Natasha Fatale in several episodes. Mr. Big is confirmed to be Fearless Leader's superior; however, Mr. Big works behind the scenes in the shadows and very little is seen of him, while Fearless Leader seems to act as Pottsylvania's public figure and military leader. Mr. Big is the only man besides Fearless Leader (possibly even more so) that Badenov fears the most, fainting dead away at the sound of his name.

Mister Big only appeared in two storylines, "Upsidaisium" and "Metal-Munching Mice", and was referred to by name twice in the "Jet Fuel Formula" story and once in "Missouri Mish Mash". His schtick consisted of having a short stature (despite his name, he's as small as a mouse); however, he would cast a long, tall, and menacing shadow against whatever wall was handy, projecting a sense of fear into whomever he was speaking to (usually Boris and Natasha).

In the Upsidasium storyline, Boris and Natasha were trying to steal the claim to Bullwinkle J. Moose's mine of Upsidasium, the anti gravity metal. After failing to capture the floating mountain, Mount Flatten, Fearless Leader sent Mr. Big to take over the operation after Boris and Natasha's failed attempts. Once there, Mr. Big explains the top secret reason for Pottsylvania's interest in the floating metal. Years back, in the little mean country, cheap cars, the Assassin 8, that were run on by squirrels in the engines were mass produced, exponentially greater than the space of the mere six miles of roads the country had. The government had to intervene when the key to the machine that made the Assassin 8s could not be found and a scientist named Dr. Popover had the solution to the parking problem, Upsidasium, which granted him status has a national hero, promptly before he was arrested for knowing too much.

After the metal in the floating mountain was mined and refined into metal bars which were securely stored at Fort Knicknack, Mr. Big and Boris and Natasha tried again to steal the metal, only to run afoul of Rocky J. Squirrel and Bullwinkle J. Moose, who unlike with Boris or Natasha, Rocky and Bullwinkle discovered who Mr. Big was. Cornered, the greedy gangster held onto a piece of stolen Upsidasium and refused to let go and was drifting upward into space.

In the second storyline of season 2, the Metal Munching Moon Mice, thousands of metallic mice were chewing on and destroying tv antennas, so as to get the populace to leave the US, and Pottsylvania would swoop in and take over. Boris was disguised as one of the moon mice, better known as the "big cheese", and was controlling the mice. It wasn't until Gidney and Cloyd arrived on Earth that Rocky and Bullwinkle were told were the moon mice really came from and Mr. Big's plan and involvement in the enslaving of the moon men and their creations was revealed. WIth the last of the moon mice on Earth, Mr. Big left the Moon and headed back to earth, only for his ship to be destroyed accidentally by Boris as the moon mice were disposed of. After bailing out, the diminutive villain threatened Boris's life and the last we'd seen of him was censored as he attacked Boris.

Mr. Big is sadistic, telling Boris to slowly cut the rope Bullwinkle and Rocky were hanging from to make the fun last longer. At one point he tries to convince Boris to blow himself and Mount Flatten apart, but chickens out when Boris points out that he, too, would be killed.

In the newspaper comics, he goves out the Triple-Cross medal for giggles by pretending it's the highest honor, when in reality the highest award is the Double Double-Cross. 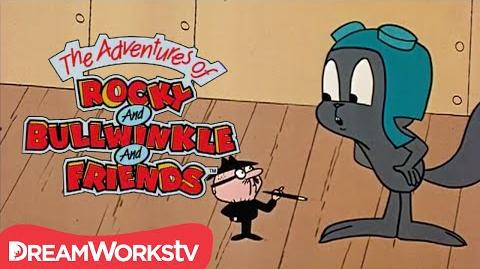