Pottsylvania is a fictional country that appeared in the television series Rocky and His Friends and The Bullwinkle Show, collectively referred to as Rocky and Bullwinkle.

It was noted for being a nation dedicated to all matters related to espionage and deceitfulness. Casual conversations would have double meanings, its highest honor was the Double Cross, and its newspaper, The Pottsylvania Eavesdropper, was printed in invisible ink. The Ice Cream Man sold top secret documents. A hotel required a password and told everyone to sign as “Smith” to keep themselves anonymous. Populated almost entirely by government agents and saboteurs, Pottsylvania is described in post-Cold War media as the one nation where the Cold War never thawed.

Many areas of Pottsylvania such as Ailartsua praised all forms of crime, such as bank-robbing, children destroying gardens, double-crossing, and even attempting to run over old ladies. A person would even be punished and sent to jail for good deeds.

They are unfriendly towards tourists and outsiders, putting all of them into jail, likely to try to keep their secrecy. One of these outsiders, Bullwinkle, was caught in a Natasha disguise and was about to be beheaded before Rocky saved him in the Jet Fuel story. However, the prison guards are prone to bribes to free the prisoners. "Go Home Yankee" signs could also be seen on windows of homes and businesses.

Outside of their espionage-centred culture, Fearless Leader stated that Pottsylvania has no art or culture.

In schools, children were taught their ABC's: Assassination, Bomb throwing, and Conspiracy. Universities offered courses in particular crimes, such as the University of Safecracking. While boring holes in a lifeboat, Boris mentioned a Ukrainian safecracking college in the Jet Fuel story.

Pottsylvania has notoriously bad television programming, to the point where Boris Badenov planned on weaponizing it to blackmail the United States, and even Fearless Leader couldn't bear watching it. Commercials last for hours on end and are poorly constructed, making them unbearable to watch.

Pottsylvania's industries, besides espionage, included the production of a vehicle called the "Assassin-8". Millions of these vehicles were built despite Pottsylvania having only 6 miles of road, which caused enormous traffic jams and nearly destroyed the country’s economy.

Unfortunately, according to Fearless Leader in the Goof Gas story arc, Pottsylvania has no natural resources, art, or other things to offer in trade with outside countries. As a result, their economy is very weak, and the government uses theft and trickery to keep the nation from crashing. This could be one of the reasons Pottsylvania is so bad.

However, in the newspaper strip they have been shown to steal items needed for exports, such as a mold for Statue of Liberty souvenirs from 1939, which they used to create little Statues of Liberty to export to the United States. Fearless Leader states that this was one of Pottsylvania's biggest exports.

It is also mentioned that some citizens are punished by having to work in The Salt Mines. It is unknown if this salt is exported or solely kept in the country.

The government of Pottsylvania is headed by a uniformed dictator known only as Fearless Leader. However, he works for the government head Mr. Big. Mr. Big works behind the scenes in the shadows, while Fearless Leader seems to act as Pottsylvania's public figure and military leader. The people do have elections, but the elections are often rigged in Mr. Big's favor, and oftentimes only Mr. Big is on the ballot.

They are stated to have no friends or allies and are said to have declared war on the world without telling them in the Goof Gas story arc.

As a nation of spies, the country generally relies on stealth and infiltration rather than direct force.

Boris Badenov and Natasha Fatale seemed to be Fearless Leader's most frequently used secret agents, often sent to execute the country's schemes for gaining global power. However, this appears to only be for practical reasons, as Fearless Leader shows great distrust towards Boris, and at one point is furious that Boris is the only agent available in Missouri.

Other than being a nation of spies, they are shown to have a normal, formal military comprised of soldiers. Fearless Leader himself wears a military uniform, suggesting he is head of the military and directly involved in military affairs. However, in the Goof Gas story arc, one of the other Pottsylanian politicians states they would not do well in war because, "We are all cowards!"

However, targeting the government is punishable by government officials.

In Boris and Natasha: The Movie, at least three Pottsylvanian flags are seen hanging in Fearless Leader's office. Here, the flag is red and features a black emblem with a star in the center and white outer ring.

The new Pottsylvanian emblem is a red raised fist in a black circle, referencing an "iron fist" and can be seen all around Fearless Leader's base.

Natural landmarks included "Whynchatakea Peak,” a large mountain. The geography of Pottsylvania is indeterminate, however. In some episodes, it appears to be a peninsula, while in others it appears to be either a coastal nation (with seaports) or completely landlocked. Nevertheless, it is accessible by submarine, which appears to be the main form of entry. It is usually shown to be filled with or surrounded by mountains.

In Boris and Natasha: The Movie, it borders the fictional nations of "Wrestlemania" and "Yoursovania", as well as the real-life nations of Yugoslavia, Romania, and Bulgaria.

In the 2018 reboot, it is shown to be an island and is stated to be a very tiny country. Many of the maps of Pottsylvania change it’s outside boundaries and location within Europe. It looks like Pottsylvania managed to be in

Flora in Pottsylvania included the man-eating Venus flytrap-like plant known as the "Pottsylvania Creeper ," and one of the world's few supplies of mooseberry bushes – mooseberries being an ingredient used (in Rocky and Bullwinkle's world) for the production of rocket fuel. Unfortunately, the last Mooseberry Bush was destroyed.

"Hail Pottsylvania" is the national anthem of Pottsylvania, which is sung in the Missouri Mish Mash arc by Fearless Leader and Boris. It also appears in The Adventures of Rocky and Bullwinkle.
Lyrics:

(Video with the song as used in the film below)

Pottsylvania is a parody of a Cold War-era Eastern European country (possibly intended as a satire on East Germany: Pottsylvanian characters often use German words, and the Iron Cross can be seen on military aircraft).

Pottsylvania seems (from what little we see of it) to be divided mainly among two ethnic groups: Russian and German. Boris and Natasha are Russian, Fearless Leader is German, and incidental Pottsylvanian characters are divided fairly evenly between the two, with names such as Feodor and Dmitri interspersed with Heinrich, Gerhardt, etc.

Even though Pottsylvania was generally seen as a spoof, the Soviet Union did not take that very well and decided to ban Rocky and Bullwinkle, seeing it as propaganda that tries to devalue their nature. 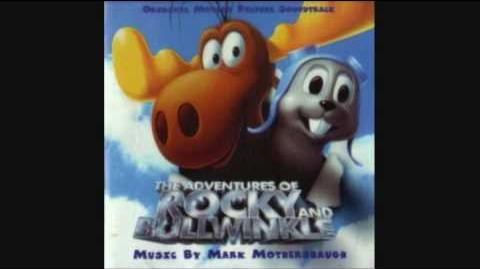 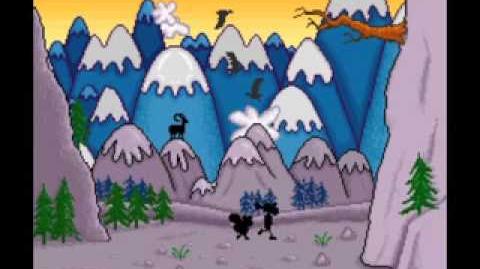 The Adventures of Rocky and Bullwinkle (SNES) - Pottsylvania 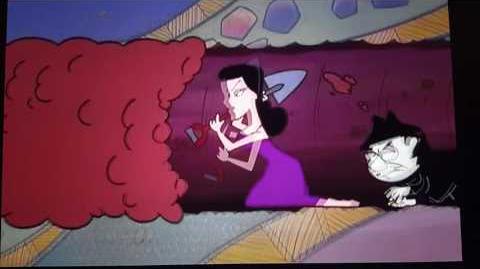 The Adventures of Rocky and Bullwinkle (2000)
Community content is available under CC-BY-SA unless otherwise noted.
Advertisement