The Adventures of Rocky and Bullwinkle

Released in June 30, 2000. The Adventures of Rocky and Bullwinkle was the third film in four years to have been a Jay Ward cartoon adaptation, George of the Jungle (released in June 27, 1997) and Dudley Do-Right (released in August 27, 1999) having preceded it.

1964 saw the cancellation of The Rocky and Bullwinkle Show and life became rather miserable and melancholy for Rocket "Rocky" J. Squirrel and Bullwinkle J. Moose. Their home, Frostbite Falls, has been destroyed via deforestation, Rocky has lost his ability to fly, and the show's unseen Narrator lives with his mother, spending his time narrating everything that she does. Bullwinkle and Rocky head out to address the President of United States regarding their situation, but are stopped for six months by red tape. Meanwhile, their enemies, Fearless Leader, Boris Badenov and Natasha Fatale, lose power over Pottsylvania and dig their way to a Hollywood film studio, where they convince an executive, Minnie Mogul (Janeane Garofalo), to sign a contract, giving her rights to the show. As a result, the villains are transformed from their two-dimensional cal animation forms into live action characters (portrayed by Robert De Niro, Jason Alexander and Rene Russo. The klutzy FBI Karen Sympathy (Piper Perabo) and her boss Cappy Von Trapment (Randy Quaid) inform President (James Rebhorn) that Fearless Leader intends to make himself the President by brainwashing the American public with his cable television network "RBTV" (short for "Really Bad Television"), with virtually nothing but mediocre spy film-based programming on the air. Karen is sent to a special lighthouse to bring Rocky and Bullwinkle to the real world. She succeeds, the Narrator being brought along as well, but never being physically seen (though his shadow is glimpsed).

Fearless Leader is informed of Rocky and Bullwinkle's return and sends Boris and Natasha to destroy them. The two take a laptop with them called the CDI (standing for Computer Degenerating Imagery) which can specifically destroy CGI-animated cartoon characters, and send them to internet. Karen manages to steal their truck after they drive her car off a cliff, but she is then arrested by an Oklahoma state trooper (John Goodman) when Natasha claims to be Karen. Natasha and Boris steal a helicopter to pursue Rocky and Bullwinkle. Rocky and Bullwinkle are given a ride by "Martin and Lewis" (Kel Mitchell and Kenan Thompson) two students at Bullwinkle's old university, Wossamotta U. Boris and Natasha get there first, and make a large donation to the university in Bullwinkle's name. In return, the head of the university gives Bullwinkle an honorary "Mooster's Degree", and Bullwinkle addresses the student body, whilst Boris attempts to kill him with the CDI upon the water tower which they built in the park. Rocky recovers his lost ability to fly and saves the oblivious Bullwinkle. Martin and Lewis lend the two their car, but Bullwinkle goes on a wild ride through Chicago. Boris and Natasha once again attempt to kill the two but instead destroy their helicopter. Karen escapes prison with a help from a lovestruck Swedish guard named Ole.

Karen, Rocky, and Bullwinkle are reunited but then arrested and put on trial, where Bullwinkle's dimwittedness takes over him and he sabotages their case examining Karen as the prosecutor, not the defense attorney. However, the presiding Judge Cameo (Whoopi Goldberg) dismisses their case upon recognizing Rocky and Bullwinkle, stating to the District Attorney (Jeffrey Ross) that celebrities are above the law.

The three then obtain an old biplane from a man named Old Jeb (Jonathan Winters), and escape Boris and Natasha again. The evil duo consider quitting their occupations and getting married, then Fearless Leader calls on the phone. Afraid to admit they failed, they lie to Fearless Leader that they killed Rocky and Bullwinkle. Meanwhile, the plane the heroes fly in is unable to fly with all three aboard. Rocky flies Karen to New York City to stop Fearless Leader, while Bullwinkle flies the plane to Washington, D.C. and lands at the White House. The villains capture Karen and Rocky. Inside the White House, Bullwinkle is discovered and, due to having a small brain, resists the mind control. In an attempt to stop Fearless Leader, Cappy e-mails Bullwinkle to RBTV's headquarters to free them. A battle follows, with the heroes winning and convincing the American public to vote for whomever they want, but to replant Frostbite Falls' trees. Bullwinkle fiddles with the CDI and inadvertently zaps the villains back to their two-dimensional cartoon forms, and ultimately sends them blasting off to the internet once and for all. 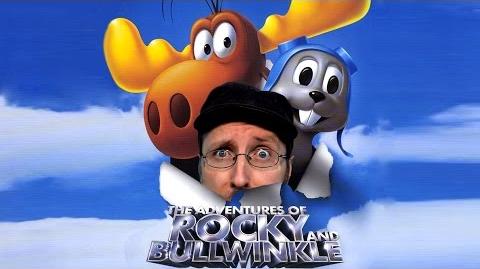