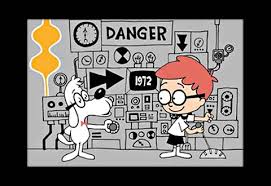 The WABAC (Wayback) Machine is a fictional machine from the cartoon segment "Peabody's Improbable History", a recurring feature of the 1960s cartoon series The Rocky and Bullwinkle Show. The WABAC Machine is a plot device used to transport the characters Mr. Peabody and Sherman back in time to visit important events in human history.

The Rocky and Bullwinkle Show

Within the Peabody's Improbable History cartoon segment, the machine was constructed by Mr. Peabody, a professorial, bow tie-wearing dog, as a birthday gift for Sherman, Mr. Peabody's adopted human son, to be able to visit famous historical people or events. At the request of Mr. Peabody ("Sherman, set the Wayback machine to ..."), Sherman would set the WABAC controls to a time and place of historical importance, and by walking through a door in the WABAC machine, the two would be instantly transported there. Examples of places or people visited are the Marquess of Queensberry and the rules of boxing, the imprisonment and memoirs of Casanova, and Jim Bowie and the Bowie knife. The machine apparently later returned Mr. Peabody and Sherman to the present, although the return trip was never shown. The segment traditionally ended with a bad pun. Either of the names WABAC or Wayback are in common usage, with the term "WAYBACK" explicitly indicated during the segment in which Mr. Peabody and Sherman visit the "Charge of the Light Brigade". The precise meaning of the acronym WABAC is unknown, but the term is obviously a play on "way back", as in "way back in time", and the names of mid-century, large-sized computers that often ended in "AC" (generally for "Automatic Computer" or similar), such as ENIAC or UNIVAC. Indeed, according to Gerard Baldwin, one of the show's directors, the name "WABAC" is a reference to the UNIVAC I.

The concept or term "Wayback Machine" has been adopted in popular culture as a convenient way to introduce issues or events of the past, often employing the original line "Sherman, set the Wayback machine to ...". This introduction was used by the character Kevin Flynn in the film Tron (1982), for example. As in the original cartoon, the Wayback Machine is often invoked to suggest the audience follow the narrator back to the past. Frequently such visits to the past are trips of nostalgia, remembering times, places, or things of the not-so-distant past. One example of popular usage occurred in an episode of the TV show NewsRadio ("Goofy Ball", 1995), when station owner Jimmy James says: "Dave, don't mess with a man with a Wayback Machine. I can make it so you were never born." The Wayback Machine of the Internet Archive was named after the WABAC.

In DreamWorks' Mr. Peabody & Sherman film (2014), the WABAC machine is a central element to the plot, and the machine's full name is revealed to be for Wavelength Acceleration Bi-directional Asynchronous Controller. This design of the WABAC includes influences from Doctor Who's TARDIS, being bigger on the inside than it is on the outside, and having Gallifreyan symbols occasionally visible.

Fearless Leader will not be liking this!
This article is a stub.
You can help Rocky and Bullwinkle Wiki by expanding it.
Community content is available under CC-BY-SA unless otherwise noted.
Advertisement